A linocut I carved and printed this spring, as we are starting to come out of our long pandemic slumber.

When I was in my twenties, my good friend Ardis Macaulay did a kind of oracular reading for me of her David Carson Medicine Cards, and from that, I was left to understand that my innermost essential animal spirit was a hare. A hare! It didn’t seem to be a very sturdy, fierce creature to have as a spirit animal, especially as I was getting ready to begin my life as an artist in New York. I would have rather the card have represented a wolf or a bobcat: a creature that could stand up for itself in a conflict.

But then I remembered the Life Nature Library book The Mammals that I pored over as a kid. There was a fierce rabbit or hare in there, I recalled:

Here this rabbit is driving a raccoon away with a few sharp, decisive kicks. No messing around.

Its a rabbit, actually: Kicking butt! That was a kind of animal spirit I could take with me to NYC happily. Over the years I have grown to love and appreciate the energy of this creature: its beauty, dignity and ability to thrive in adverse circumstance.

Today I happened across the most excellent @scientificamerican Scientific American article The Legacy of the Trickster Hare by Krystal D’Costa. Ms D’Costa takes apart the idea of the fluffy Easter Bunny and introduces a darker, more powerful creature. To begin with, here’s the difference between a rabbit and a hare, from that article:

“The difference between a hare and a rabbit makes a world of difference when you start to ascribe meaning and intent to the animal. Hares are larger and live above ground; their fur may change in accordance with the seasons (perhaps for camouflage—more on this later); and they’re fast, powered by large hind legs. They’re also largely independent and tend to be solitary. This is in contrast to rabbits who are smaller, gregarious, and spend the majority of their time in burrows (with the exception of the American cottontail).”

Ms. D’Costa takes us through the world to tell us myths of the hare. Hare was the messenger of Artemis, the goddess of the hunt. Hare could travel all across the world from the realm of humans to the realm of gods, fluidly, and in the moonlight. The hare and the rabbit are associated with the moon in many cultures, from Japanese, Chinese and Korean lore to that of aboriginal Americans. In the Japanese artist Yoshitoshi’s One Hundred Aspects of the Moon, the warrior Sun Wukong fights the Moon Rabbit (it doesn’t look like a fair fight): 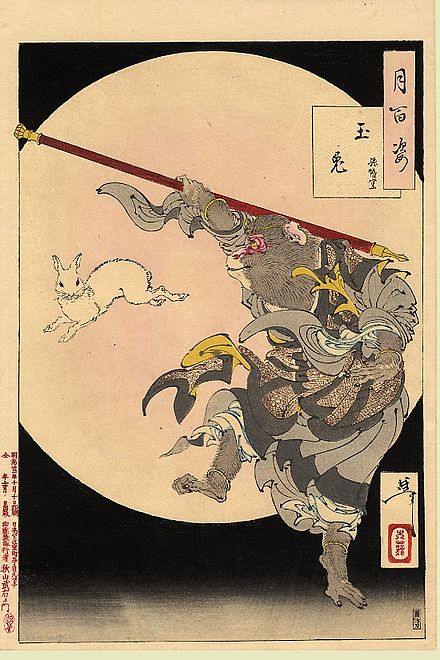 In Mayan culture, the rabbit is seen as being associated with their Moon Goddess. In North America, in Cree culture, there is a myth of a rabbit wanting to be carried to the moon. A crane was the only bird who would carry him there. As they flew, the heavy rabbit stretched the crane’s legs, which is why the crane’s legs are as long as they are. And the rabbit (once it got up there) can still be seen riding the moon when it is full on a clear night.

We had the Uncle Wiggily board game when I was very small, which I remember as being not all that interesting, except I loved the plastic figures of Uncle Wiggily. I think it was because I loved his style and maybe, looking at it now, the way his face was drawn on the box 🙂

Plus, somewhere along the line, we had a well worn copy of the stories of Br’er Rabbit. Ms D’Costa refers to him as the “ultimate trickster figure,” the trickster being powerful and also somehow amoral who occasionally uses his powers to help others.  “He is constantly using his wits to escape tricky situations, but also rarely neglects those smaller than him.”

And as I am making my way down this rabbit hole (if you’ll forgive me) of hare and rabbit reading and research, I am looking here at Br’er Rabbit and then back at my linocut rabbit, above, and seeing some distinct similarities. I hope I can be like him–using my wits to escape tricky situations and also rarely neglecting those smaller than me.

Not the original Hare Medicine Card, but I made an homage to it by designing a stencil of it for StencilGirl…