Kuniyoshi did a woodcut of a famous japanese folk tale of the legend of the tongue cut sparrow. I am sort of fascinated with it–the print and the story–after I got to see a copy of the print at the NY Armory Print Fair this past fall.

The story goes like this–actually I thought it was slightly different but have been reading more and this version makes more sense:

One morning, a poor woodcutter went into the mountains to cut timber and saw an injured sparrow. He took it back to his home to nurse it back to health. His wife, who wasn’t so nice, was annoyed that he would waste time and food on the sparrow. The old man, undated, continued caring for the bird.

One day, the recovering sparrow ate all of their meager supply of rice. The wife was so angry that she cut out the bird’s tongue and chased it away.

The woodcutter went searching for the bird in the mountains where he had originally found it. Other sparrows greeted him  kindly and led him to his friend, the little sparrow he saved. The sparrow was a wealthy member of his community, and treated him to food and drink. They visited and talked and laughed. When it was time for the woodcutter to take his leave, the sparrow offered him a large basket or a small basket as a thank you gift. The elderly woodcutter chose the small basket. When he arrived home, he opened the basket and found treasure. The not-very-nice-wife, hearing of the existence of a larger basket, ran to the sparrow’s home in the hope of getting more treasure for herself. She was given the larger basket upon her demand, but was warned not to open it before getting home.

She of course opened the basket on the mountain path on the way home. The basket was filled with all the ills of the world, and were unleashed upon her and the whole world, Pandora’s Box-like.

The version of the story I heard at the print fair was a little different. The woodcutter found the injured sparrow (the cut tongue WAS the injury), and nursed it back to health though his wife didn’t like that. They took it together to the sparrow’s home. He was a prince, as it happened, and offered them a small basket and a large basket. The woodcutter liked the small basket, but the greedy wife made him take the larger. They struggled with the basket on the way down the mountain (they were warned not to open it till home, and the wife wanted to open it earlier and they struggled). In the struggle, the basket opens, unleashing all the sins of the world. But in that story, the elderly beneficent woodcutter is harmed as well. Didn’t make as much sense.

ANYWAY, the whole point of my going on about it is that I was reading about it on line and found these fantastic dolls depicting the characters from the story. Apparently there’s a tradition in Japan of making these dolls and tableaus for them to live in: 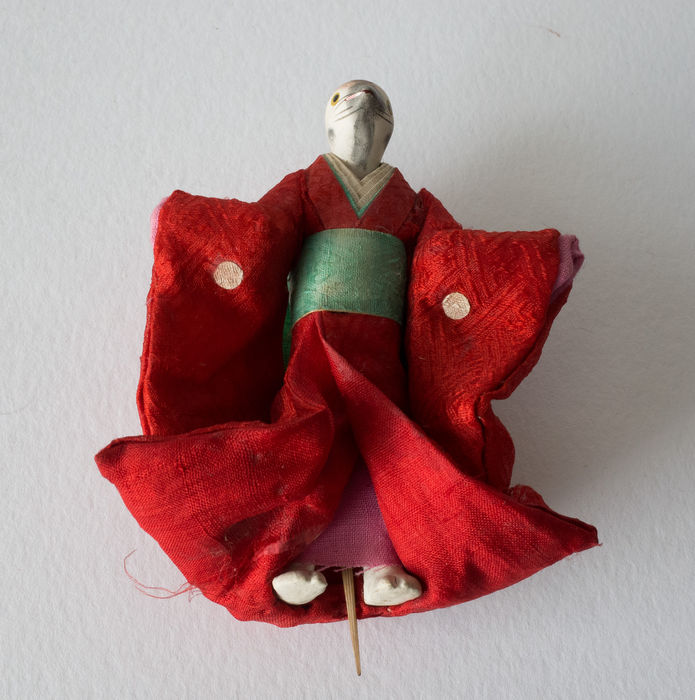 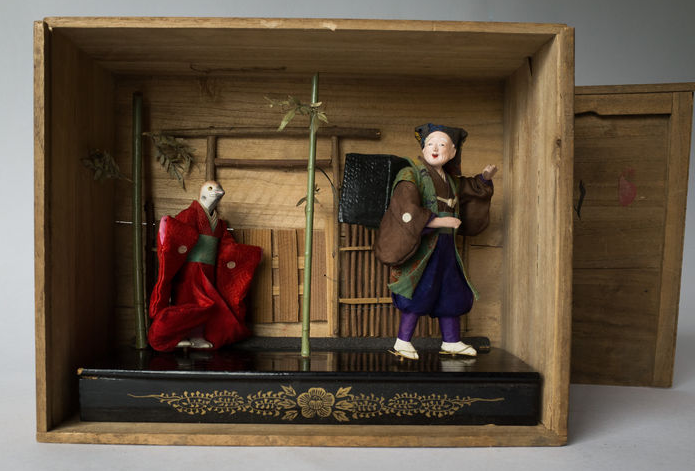 I can’t give you provenance for the dolls because I don’t know–they were at an auction site and the maker wasn’t listed, nor the date of their construction. But I thought they were too magical not to share!