A couple of weeks ago, I got to see the most fantastic show at the NY Historical Society on the advice of my friend Robbie Manning. The whole show was one knockout painting after the next, actually, but the painting I went to see was this one, “Gassed” by John Singer Sargent, painted in 1919. I didn’t take a picture of the whole thing as it is unexpectedly HUGE. The men are almost life sized–or so it seemed and felt. 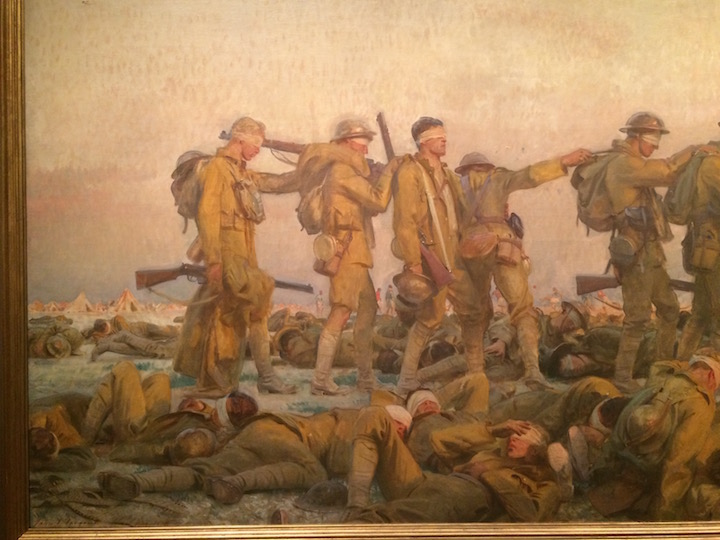 To see it in real life, you see all these details that are not apparent when you see the tiny reproductions in books. For one thing, beyond the legs of the gassed men being led blindfolded to the tent where they will recover from their wounds, you can see men playing soccer–tiny flecks of red and LIFE in among the wounded and dying: 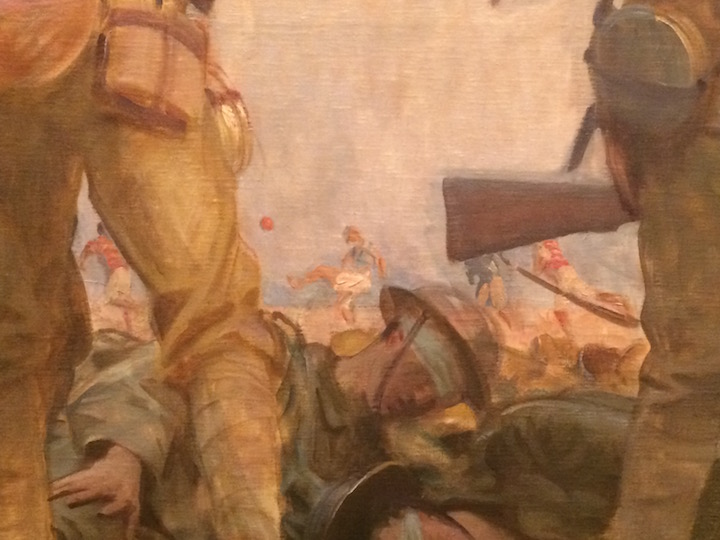 And in this detail, this beautifully painted hands, and that shadow under the lip–wonderful painting: 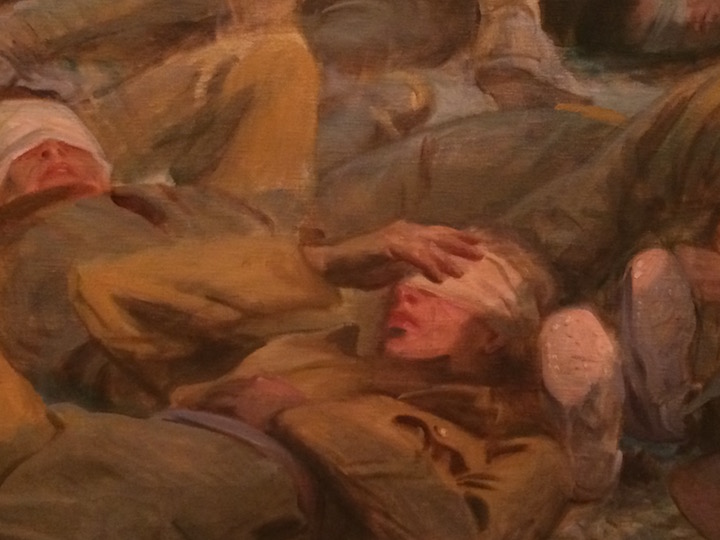 This is a bit more of the painting, moving to the right. More beautifully painted hands. And those ropes on the right that I always wondered about looking at it in reproduction are the stabilizing lines that hold up the medical tent: 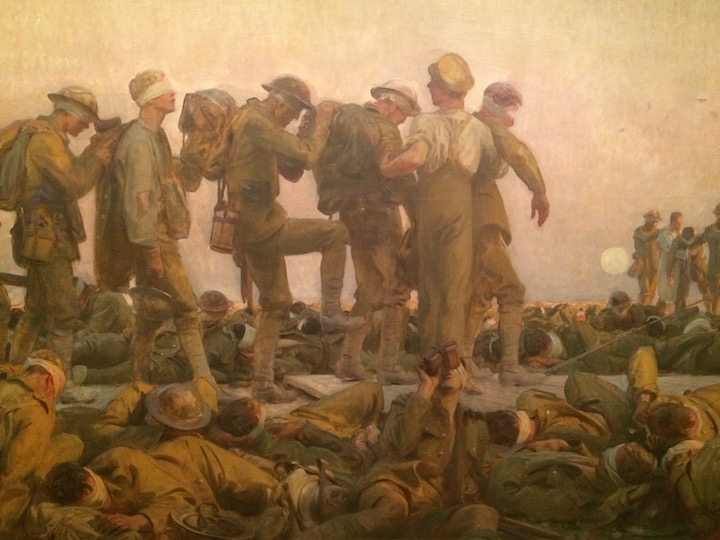 Here’s some more of the tent ropes, but seeing the second group of men big made me see the mastery of Sargent–the brushstrokes that create those faces, that sense of golden light and dust:

But somehow even more affecting to me was seeing these tiny planes absolutely engraved on the sky like scars: 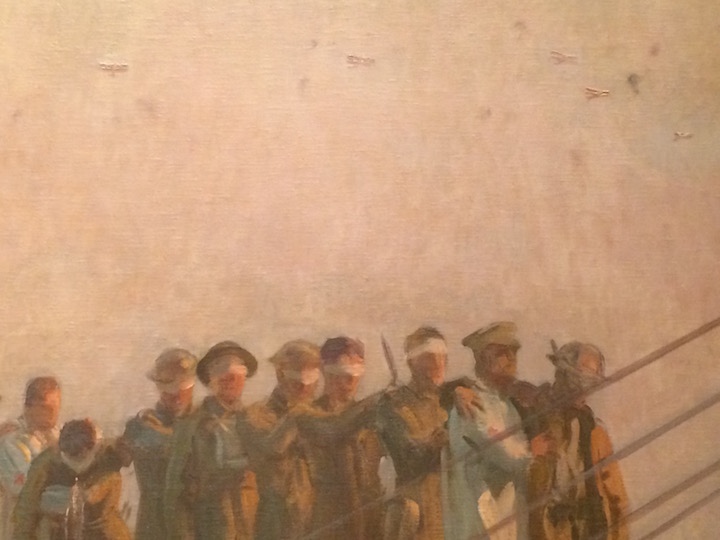 This is one incredible painting, if you ever get a chance to see it. It lives in the Imperial War Museum in the UK, but I think is toured about with some frequency.

Other Sargent pieces in the show were these watercolors:

This is my favorite–those red blankets are almost as good as Vermeer’s Woman in a Red Hat: 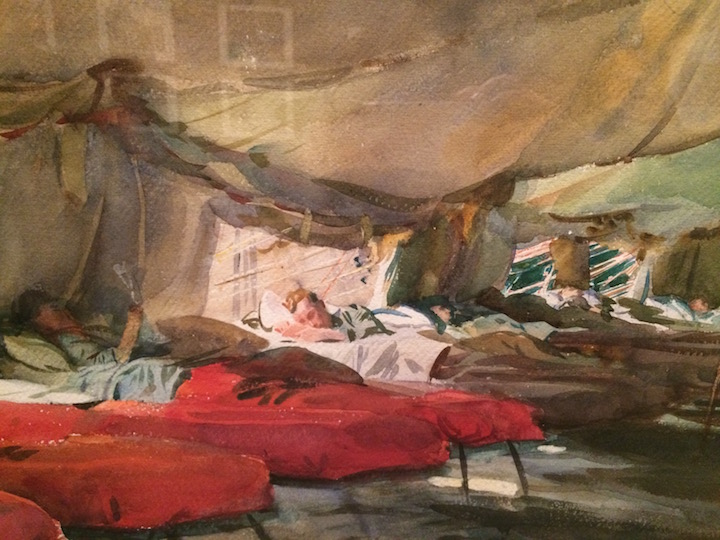 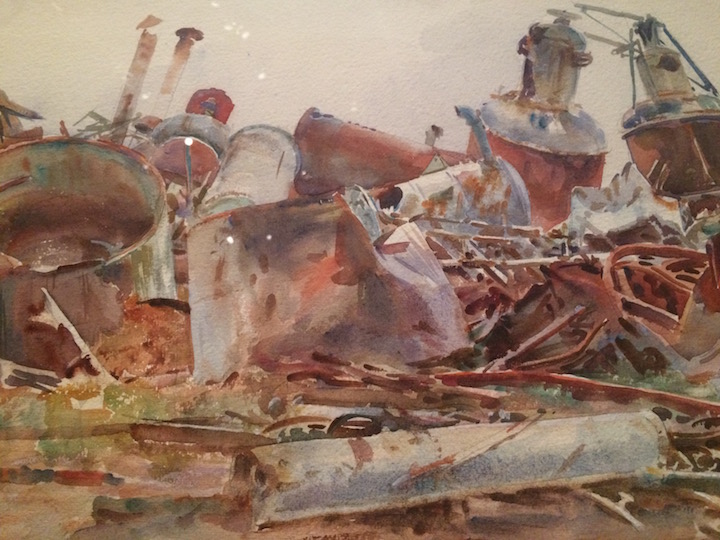 And finally, this shocking thing:

This is a WW1 US recruitment poster. My Dad’s family are Americans of German descent, and my Dad always said that he was called a Kraut and a Nazi when he was a schoolboy, and that there were terrible propaganda posters around from WW1 and then WW2 with these kinds of images demonizing Germans. He said there was one from WW2 in particular that haunted him of a German soldier stepping on a baby. He was proud of being an American, but at that time, really felt  intense prejudice against his family.

It was an interesting show–not all propaganda, some informative, by artists embedded with the troops with sketchbooks, and some, like this final piece by Burchfield, showing a dead landscape, with one wilting flower–maybe a painting of Hope? 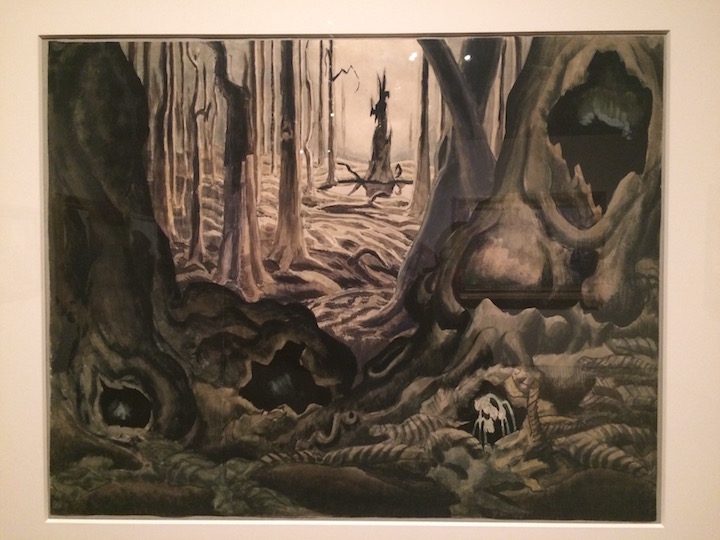