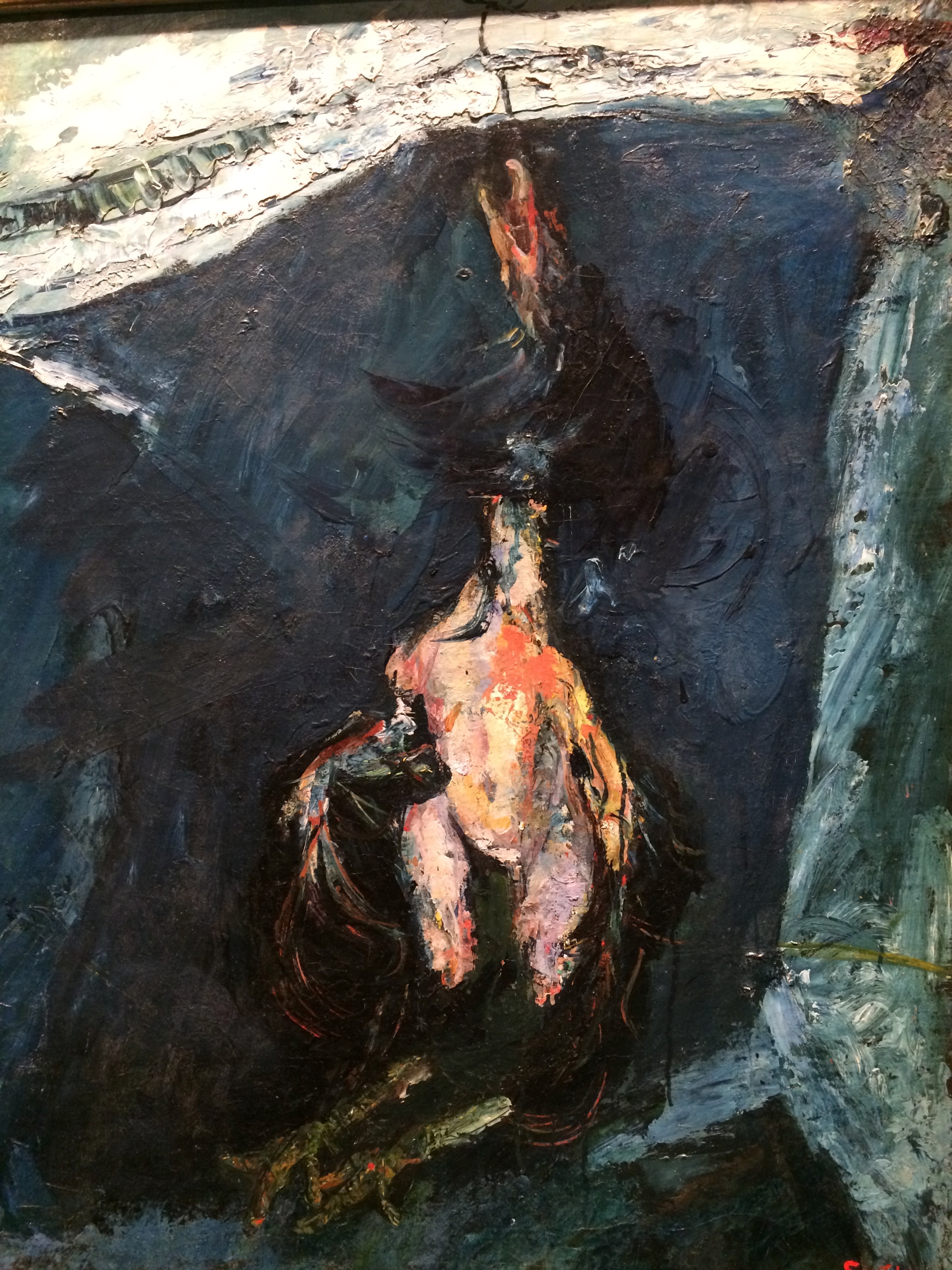 I forgot to write down the names of the paintings, but this is a chicken carcass, of course, and I have included details below.

There is an exhibit of paintings of Chaim Soutine at The Jewish Museum in NYC, now til September. It is not a massive show, but each painting is fantastically gorgeous. All are still lifes, except for a couple of landscapes to show where Soutine was living at the time he painted these paintings. They are extraordinary pieces. I think I had never seen any of these in person, only in books, but in person they GLOW on the wall. They are not horrifying, somehow, though they are of carcasses. I can’t explain this exactly. They are extremely direct, of course: there is no getting around the subject matter. But the colors and marks are ecstatic. 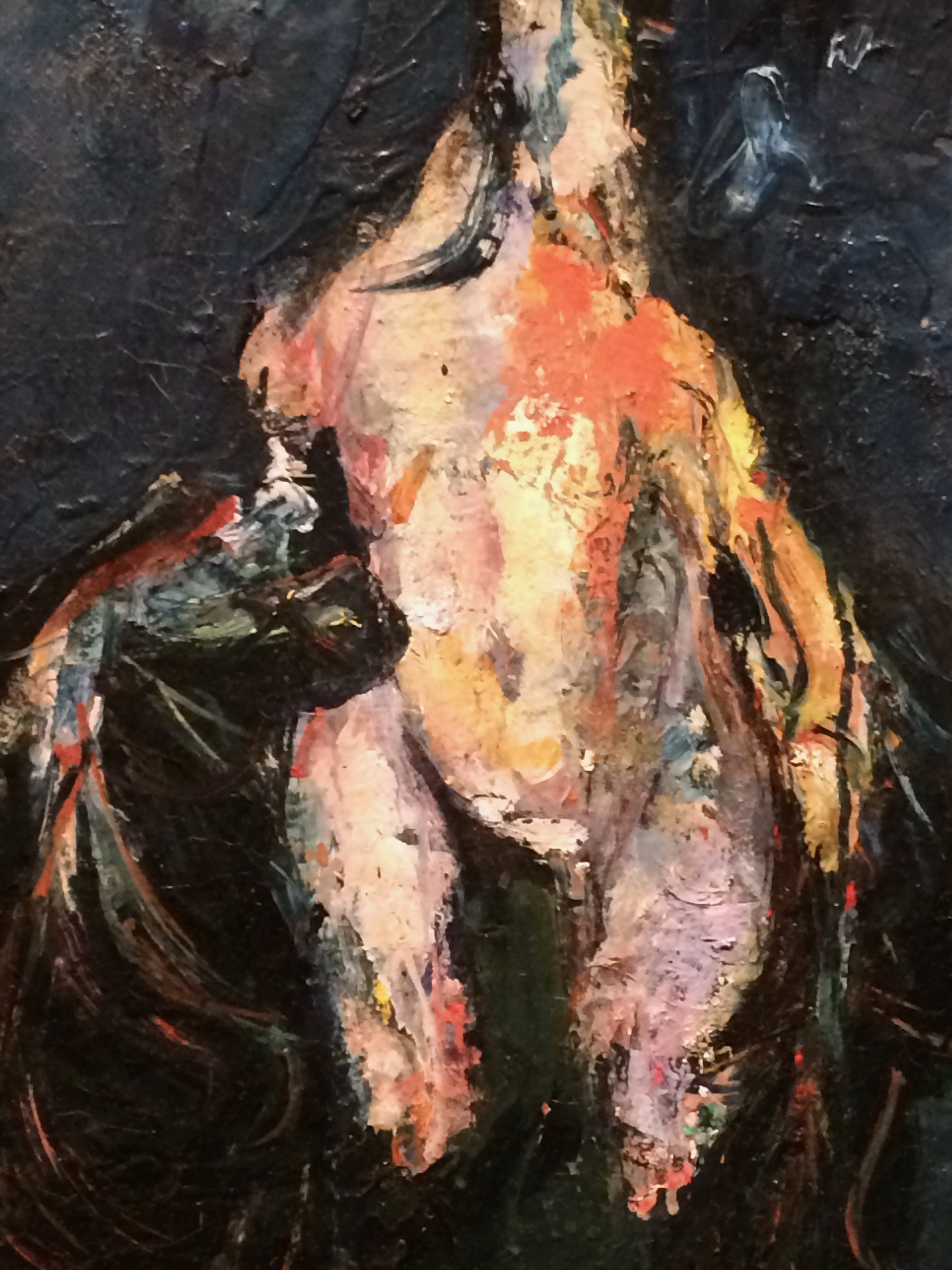 Detail of the chicken carcass painting, above.

There was a docent who was giving a tour to a group of elders as I was walking around and looking. I wondered if she would talk about this weird, kind of confusing dichotomy between the beauty of these pieces–the gasping out loud beauty–and the subject matter. But she didn’t so much. She talked about “guts” so much that finally about a third of her tour group wandered off, looking rather pale, perhaps to dine downstairs at the Russ and Daughters uptown outpost. And she talked some about what was happening at the time that Soutine was painting these things intimating that his poverty and hunger, coupled with the growing anti-semitism of the time is what led to the paintings.

There is an article in the New Yorker by Peter Schjeldahl about this exhibit which is illuminating: https://www.newyorker.com/magazine/2018/05/14/the-vulnerable-ferocity-of-chaim-soutine

In this article, Schjeldahl says, “He haunted the Louvre and painted still-lifes in a mélange of styles informed by both Cézanne and, though for some reason he always angrily denied it, van Gogh. An arrangement of two forks resting on a dish of three herring, from 1916, evokes a meagre shared meal. Soutine was known in his circle for going without food so that he could buy art materials and, later, for fasting before he painted meat, using hunger to sharpen his perception.”

And about his other paintings: “He painted landscapes that are as vertiginous, to the brink of formlessness, as anything in art to this day: tornadoes of pigment, which are beloved by every painter I’ve ever talked with about them. His woozily contoured portraits of random people—friends, a hotel page, a bride, a pastry cook—force an oxymoron: empathetic caricature, seeming at once to mock and to cherish hapless humanity. Soutine’s genius peaks in the meat pictures, made after his return to Paris, in 1921.” And in this, I find words that start to speak to me: vertiginous, maybe woozy, but certainly the idea of cherishing–there is something like a fierce honoring of the subject matter.

I sat right down in the gallery and wrote to my mentor from college, Alex McKibben, to ask him about these paintings and what meaning he could glean from them. I wished he was with me so he could give me the benefit of his lights on the matter, and then we could go out and have a beer. 🙂 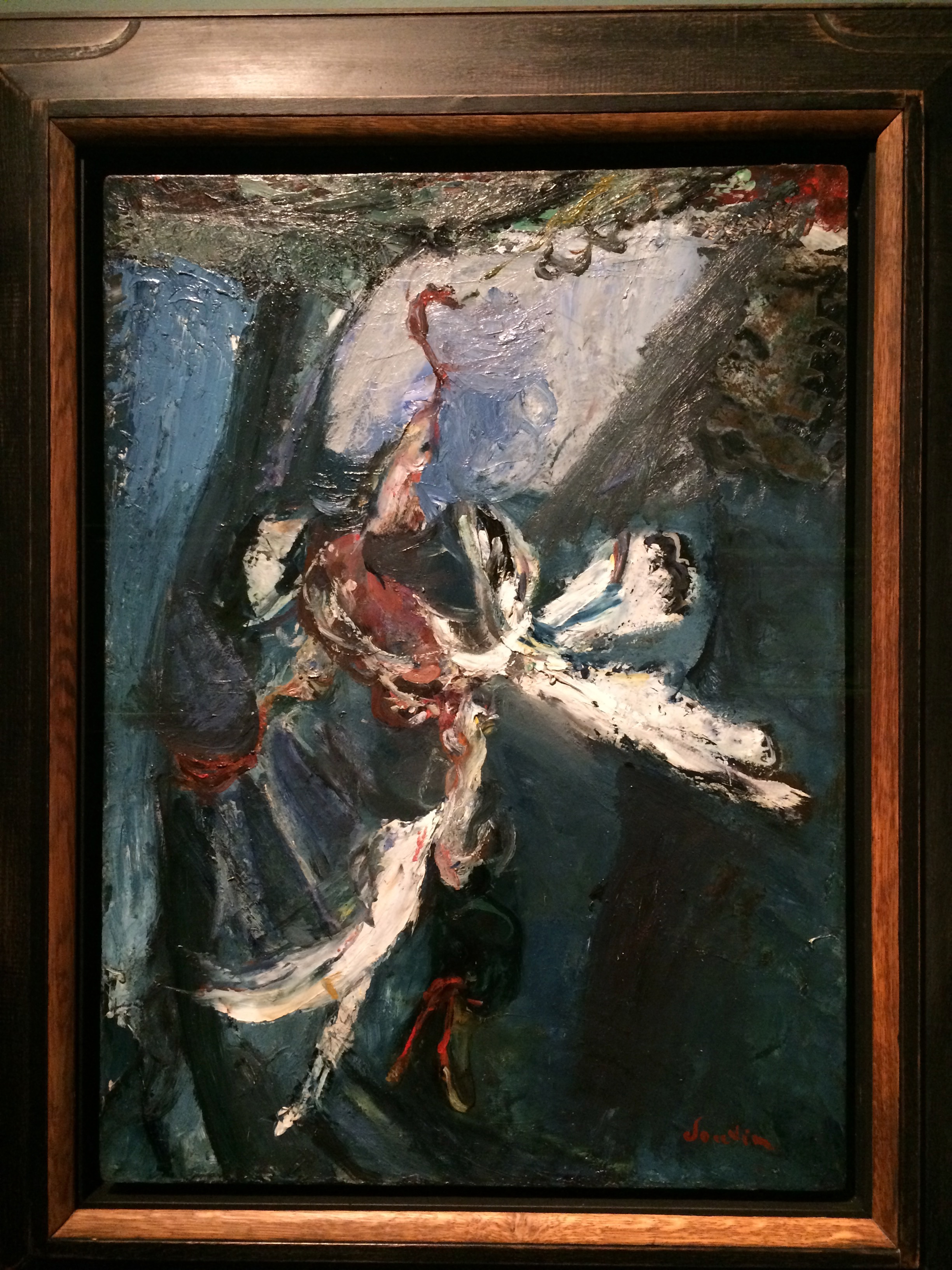 A detail of the duck carcass, above. 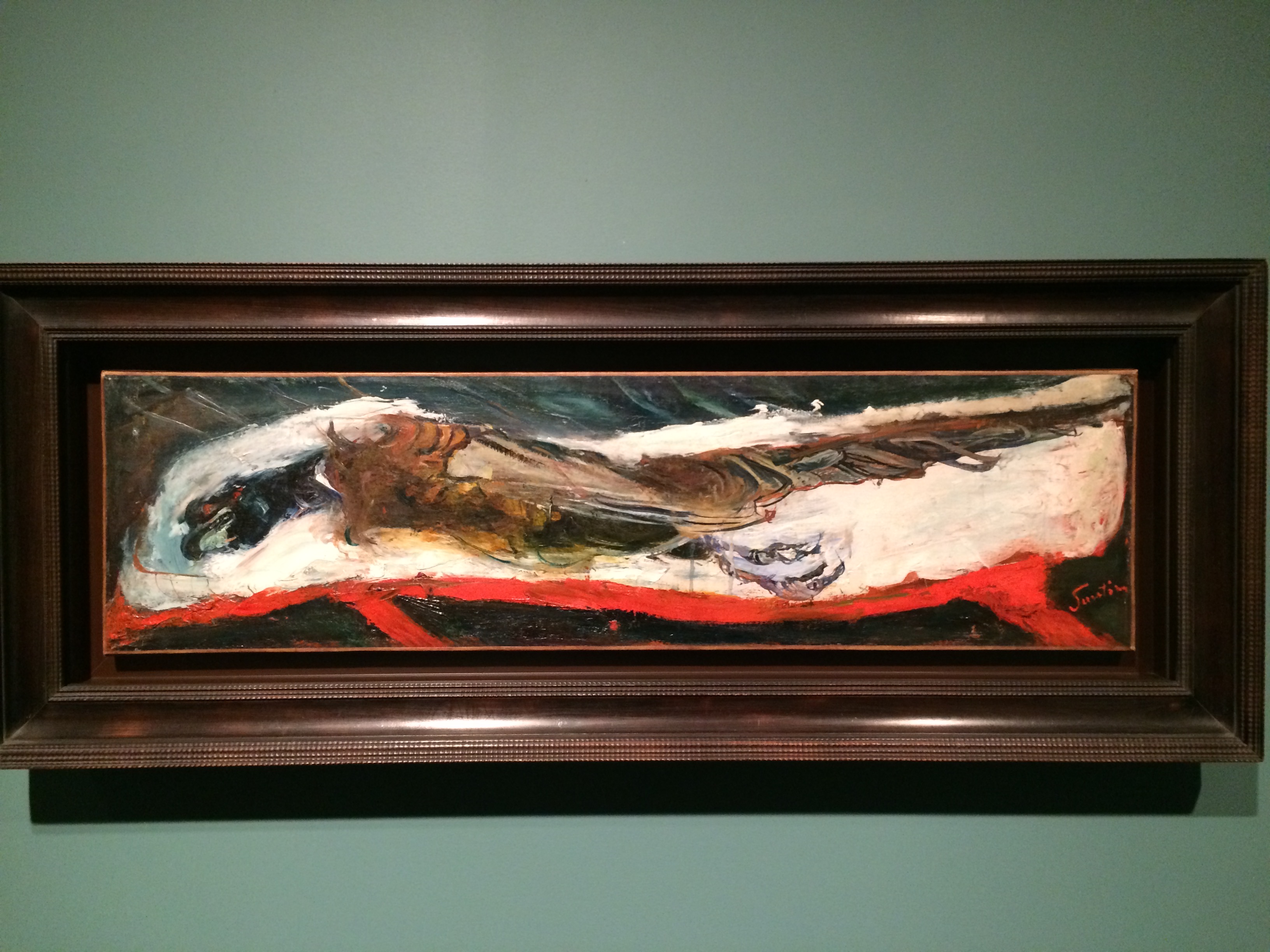 The Great Pheasant, I think this was called. 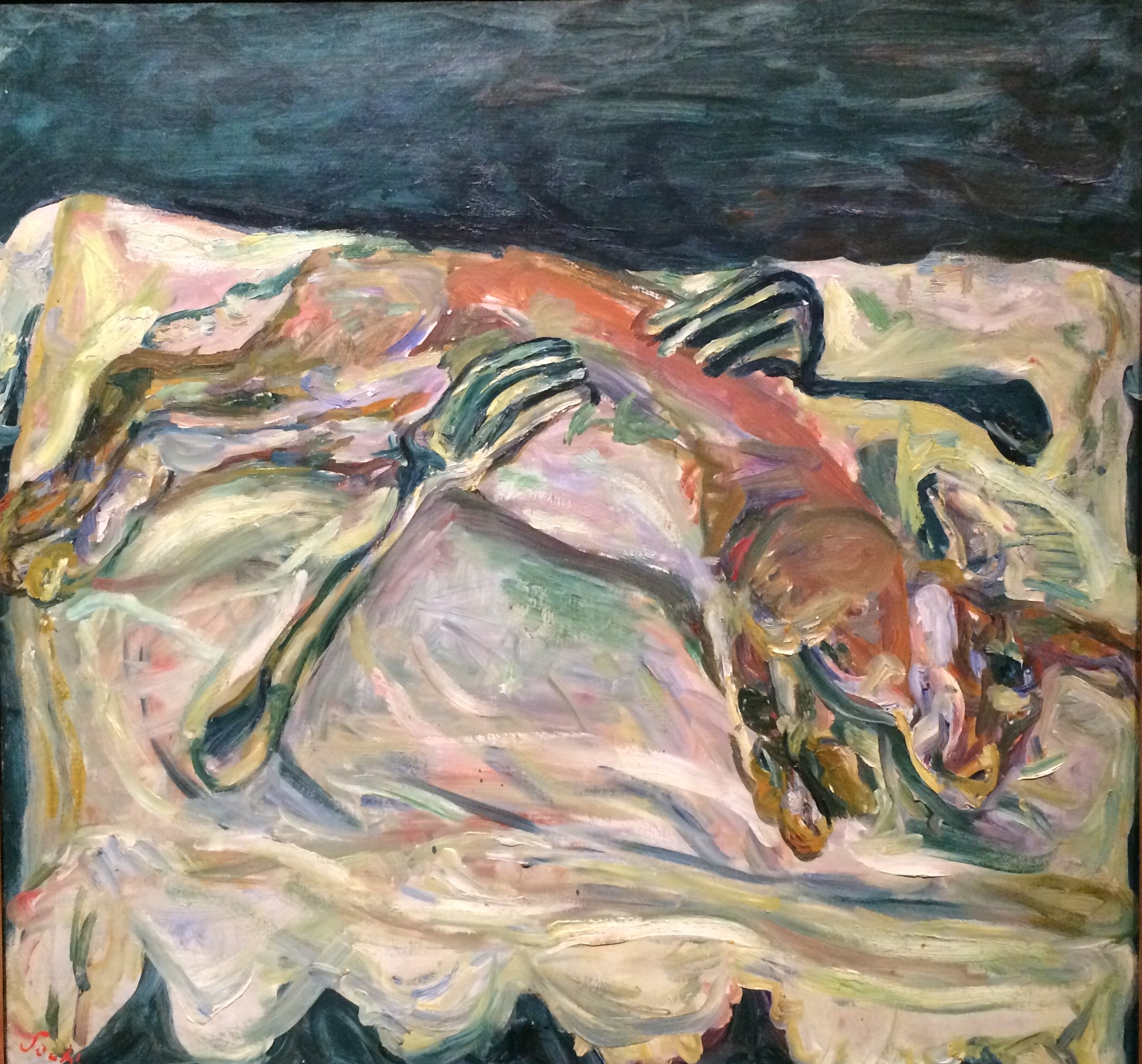 This one of the hare and the two forks was my least favorite ( the paint was cloudy and not glowing like the other paintings in the gallery), but the ceremonial way the carcass is laid out, and the hand like forks seem like a clue to the rest of the paintings.